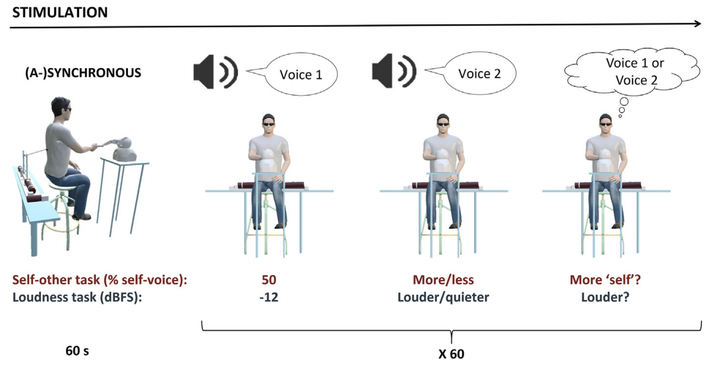 Sensorimotor conflicts are known to alter the perception of accompanying sensory signals, and deficits in sensory attenuation have been observed in schizophrenia. In the auditory domain, self-generated tones or voices (compared to tones or voices presented passively or with temporal delays) have been associated with changes in loudness perception and attenuated neural responses. It has been argued that for sensory signals to be attenuated, predicted and sensory consequences must have a consistent spatiotemporal relationship, between button presses and reafferent signals, via predictive sensory signaling, a process altered in schizophrenia. Here, we investigated auditory sensory attenuation for a series of morphed voices while healthy participants applied sensorimotor stimulations that had no spatiotemporal relationship to the voice stimuli and that have been shown to induce mild psychosis-like phenomena. In two independent groups of participants, we report a loudening of silent voices and found this effect only during maximal sensorimotor conflicts (versus several control conditions). Importantly, conflicting sensorimotor stimulation also induced a mild psychosis-like state in the form of somatic passivity and participants who experienced stronger passivity lacked the sensorimotor loudening effect. We argue that this conflict-related sensorimotor loudness amplification may represent a reduction of auditory self-attenuation that is lacking in participants experiencing a concomitant mild psychosis-like state. We interpret our results within the framework of the comparator model of sensorimotor control, and discuss the implications of our findings regarding passivity experiences and hallucinations in schizophrenia.