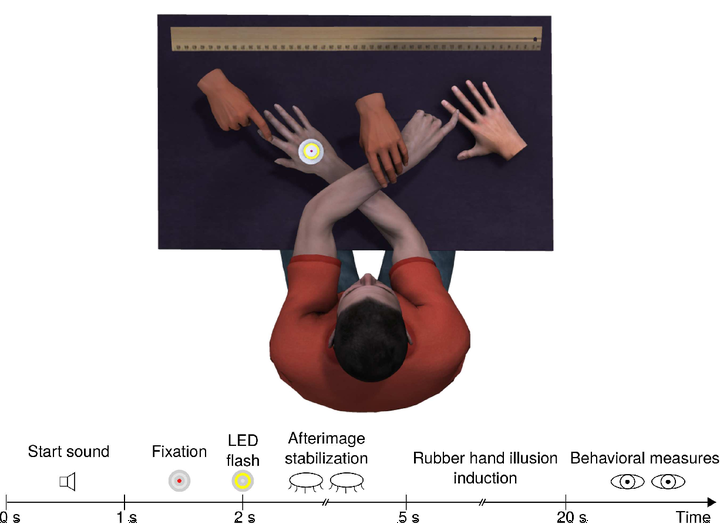 Vision is known to be shaped by context, defined by environmental and bodily signals. In the Taylor illusion, the size of an afterimage projected on one’s hand changes according to proprioceptive signals conveying hand position. Here, we assessed whether the Taylor illusion does not just depend on the physical hand position, but also on bodily self-consciousness as quantified through illusory hand ownership. Relying on the somatic rubber hand illusion, we manipulated hand ownership, such that participants embodied a rubber hand placed next to their own hand. We found that an afterimage projected on the participant’s hand drifted depending on illusory ownership between the participants’ two hands, showing an implication of self-representation during the Taylor illusion. Oscillatory power analysis of electroencephalographic signals showed that illusory hand ownership was stronger in participants with stronger alpha suppression over left sensorimotor cortex, whereas the Taylor illusion correlated with higher beta/gamma power over frontotemporal regions. Higher gamma connectivity between left sensorimotor and inferior parietal cortex was also found during illusory hand ownership. These data show that afterimage drifts in the Taylor illusion do not only depend on the physical hand position but also on subjective ownership, which itself is based on the synchrony of somatosensory signals from the two hands. The effect of ownership on afterimage drifts is associated with beta/gamma power and gamma connectivity between frontoparietal regions and the visual cortex. Together, our results suggest that visual percepts are not only influenced by bodily context but are self-grounded, mapped on a self-referential frame.